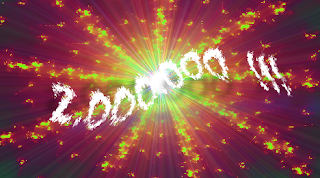 That's right, you read it right - the not quite as magical line as the previous one of 1,000,000 visits line, has been broken at last, although I never anticipated it coming to this after my year's near-constant absence. Having crossed that line in the year 2020 (less than a week before June, apparently) seems even more of an odd coincidence, because last month's comparison entries pushed the number of actual content articles over 200 (not including updates, achievements and other news), so I guess that's cause for more celebration! Anyway, I didn't post this blog entry just for these celebrations - that was merely coincidental to a dust-gathered post of UPDATES to old comparisons and perhaps even some other entries on the blog, with new surfacings of information and new versions of games having been released, etcetera.

First, I have to get you all back to the very first year I was making the blog, and revisit some of the games from that time, but this time, not because I missed something back then (that has already been mostly taken care of), but rather, new ports and modifications have appeared since my previous Updates entry.

Clive Townsend, the creator of the original SABOTEUR games for the ZX Spectrum, teamed up with SimFabric to remaster and expand both Saboteur games for modern platforms, which include Switch, PS4, XBox One and PC, the last of which you can purchase the games for through Steam. The first expanded Saboteur was released in late 2018, and the second in August 2019. These remastered versions feature much expanded worlds and missions, and lots of different graphic modes, so you can sort of enjoy all the different versions of the original games without all the hassle that emulators can give.

Most unexpectedly, my favourite ice hockey game of all time, HAT TRICK was demade for the Commodore VIC-20 in late 2016, which quite escaped my notice back then. This port requires a 16k memory expansion, but also supports 24k expansion for differing player 2 graphics - that being black helmet instead of white. Reportedly, all the bugs from the C64 were preserved for the VIC-20 port, but after a few games, I have only managed to find two, neither of them particularly useful. But still, it's surprisingly playable, and I certainly prefer the VIC-20 port over the Atari 7800 version.

Speaking of which, the C64 version was finally bug-fixed in February this year by Barfly of Extend, but it was also modified to support 4 controllers. One might think you couldn't get more epic than that, but to be honest, those bugs were part of what made the C64 such an insanely fun experience in the first place. Or perhaps that's just my opinion.

Another rather late notice for me is a Sega Master System port of JETPAC, which was in the works in 2009, but apparently never got finished. A work-in-progress version can be downloaded at the SMS Power! archive, but don't expect too much of it. And since we're on the topic of unfinished Sega versions of Jetpac, there was also a "spiritual successor" for Jetpac in the making for Sega Genesis/Megadrive in 2016, which neither seemed to get much further from the initial teaser screenshots.

On the 16-bits, there have been some interesting developments, which have necessitated some updates for some old comparisons, particularly concerning the Commodore Amiga. Apart from the plethora of successful Atari ST ports, some of which have already been incorporated into certain specific comparisons, there seem to be two conversions of YOOMP! coming up. This was originally an Atari XL/XE game, which was mentioned in one of the Unique Games entries, but has since been converted for the C64. One is called Jump!, which is being developed for A1200 and above, and the other is Yoomp!, to be released by RGCD, and is planned to be made available for even the most basic A500 models. Perhaps the releases of each will drive me into writing a comparison of Yoomp!, who knows. There's also yet another version of Saboteur in the making for the Amiga. All these mentioned have been teased about late last year, so they might still be a long time coming

But there is one big release, which requires some more immediate attention: a recently finished port of RAID OVER MOSCOW by Pixelglass Games, which was originally teased about around last Christmas. This version is compatible with all Amigas with at least 1 MB of RAM, and it looks and plays fantastic: the new control method requires no keyboard input, but you can also play the game in classic mode.


Finally, after writing that comparison of WEST BANK and BANK PANIC not too long ago, it didn't take me more than two weeks to find out a well-hidden unofficial ZX Spectrum version called School Panic. It's basic enough even for the Spectrum to be called a demake, since it has only one room with three doors, and you can't really tell whether the person (or droid) appearing from behind the door is a friend or an enemy, because you will lose a life just by waiting - a weapon will not make an appearance. An interesting idea to take the concept to another realm, but ultimately unsuccessful.


All the above information will be hopefully/eventually added into the corresponding entries, but it might take some time, if I can get myself around to doing that. But at least it's all here now.
Posted by FRGCB Dude at 18:06