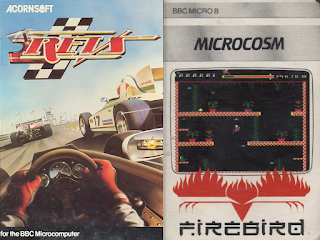 Designed and written by Geoff Crammond.

Written for the Acorn BBC Micro by Steven Reece and David Pearce.

Converted for the Commodore 64 by Andrew E. Bailey and released by Firebird in 1986.


Before I venture on to talk about the games themselves, it should be noted that only one of these game comparisons was recently featured in the most current RESET 64-magazine (the 12th issue), and I just wanted to write another comparison as a big bonus thing for the blog, since I haven't been doing comparisons since starting the Retrogame Talkshow podcast and my two video series. So, now felt a good time to do something more about the blog, and I've got the feeling I might be continuing with new comparisons for a while for now. As for the second game featured in this two-fer: it was very randomly picked months after writing the Revs comparison here, and the only connections between the two games are the publisher and that both games were only ever officially released on the BBC Micro and the Commodore 64.