While the FRGCB's closing-down has been in process, there's something new and interesting for retrogaming fans that's been in the works. Today, on the 26th of March, 2018, my good friend Bob and I have launched our very own podcast, which is simply, but very effectively called:

The first episode, which is an introductory episode, has now been released through Spreaker on Soundcloud and YouTube, and you can follow us on Instagram, Twitter @RetroGamePod, and Facebook. Take a listen, and send us some comments on any of those social media accounts, and you can also send us some e-mail to retrogametalkshow(at)gmail.com (link removed for spam prevention). 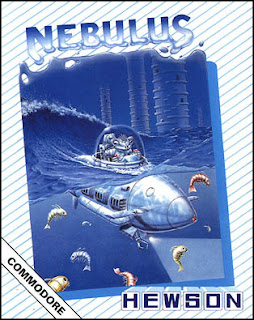 Published in the North American region as "Tower Toppler". An Italian translation called "Subline" was also published for the C64 by Edigamma S.r.l. in 1987.

Converted for the Nintendo Entertainment System and Game Boy by Bite Studios, with music by David Whittaker. Published as "Castelian" by Triffix in the USA in 1991. Also released in Japan in 1992 through Hiro Entertainment as "Kyoro Chan Land".

Also unofficially released on the Enterprise 128, but it has two releases based on both ZX Spectrum and Amstrad CPC versions.


Here we are, the last comparison of FRGCB. Well, at least, the last one I'm writing. It might not be exactly the most epic possible finale, but I thought it's a perfect reminder of how much more interesting and imaginative top-shelf game developing was at best during the 1980's, than it came to be decades later. Also, considering the number of versions listed above, it's bound to be a properly big one to end with, featuring most of the regular "contestants" and then some. In case you didn't arrive on this page through one of the forum links I have infested with my spam, click on to read, and hopefully learn something in the process.