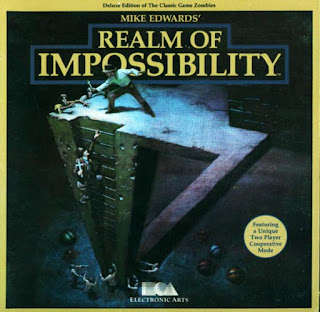 Originally designed by Mike Edwards for the 8-bit Atari, and released as "Zombies" by Bram, Inc. in 1983. Enhanced version re-titled as "Realm of Impossibility" published by Electronic Arts in 1984. Music for the 1984 version by Dave Warhol.

Converted for the Commodore 64 in 1984 by Mike Edwards and Henry S. Bolley, with music by Dave Warhol.

Converted for the ZX Spectrum 48k by Mike Edwards and published by Ariolasoft in 1985.

Converted for the Apple ][ computers by Marek Popiel, and published by Electronic Arts in 1986.


I know, I know - I was supposed to do a big one for the end of this month, but I realised about a week before my self-set deadline that I wouldn't be able to make it, because the comparison I was working on was just too big for that. But I will get that done as soon as possible, which will probably be about a month from now. To make up for it, I have chosen to do something completely unexpected, and I hope this will be one of those that will make people more interested about an often forgotten game. Who knows, perhaps this IS a big one for some of you. 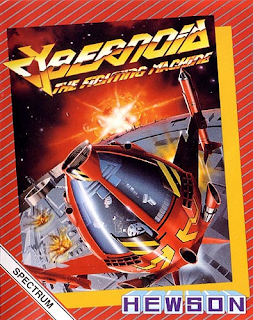 Converted for the Commodore 64 by Nicholas A. Jones, with graphics by Hugh Binns and music by Jeroen Tel.

Converted for the Nintendo Entertainment System by Chris Harvey with artwork by Adrian Carless. Published by Acclaim Entertainment in 1989.


This month's already half-way through and we're only getting to the second entry now. And it should be an interesting one, since it's the first comparison from a Hewson game - kind of surprising it took me this long to get here, but there you go. Cybernoid was always a C64 game for me due to the awesome Jeroen Tel soundtrack, but then I have never really played any of the other versions, so it's about time I took a proper look at them. I'm aware that Retro Sanctuary has made a comparison of Cybernoid a long time ago, but it doesn't feature the 16-bit versions in it, and besides, this will be a different view of the game anyway. 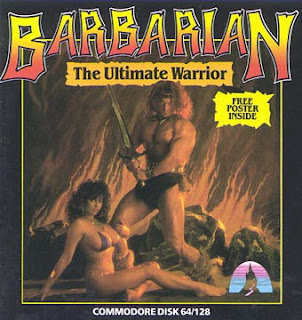 Developed and released for the Commodore 64 by Palace Software: Programming by Stanley Schembri, Designed by Steven Brown, Music by Richard Joseph, Artistic assistance by Gary Carr.
Released by Epyx in the USA as "Death Sword".

Unofficial conversions for the Commodore Plus/4 by Muffbusters and SF in 1990: Muffbusters version programming, graphics and sounds by Mucsi, with title screen by Jeva. SF version by Ferenc S.


I have been meaning to do a comparison of Palace Software's Barbarian for a long time now, but due to various reasons and excuses that I have allowed myself to make, there just hasn't been a moment so far that felt right for this one. Make of it what you will, but the time is now. On April Fools' Day 2015, I had finally begun to work on this one, so you can imagine it's one of those super long ones again, so prepare yourself with plenty of coffee. Making a comparison of Barbarian was never a suggestion, but I know many of my friends enjoyed this game back in the day, and long after that time, so this one goes for all those friends that I got around to playing Barbarian with.