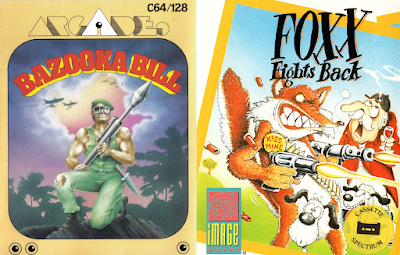 2. Foxx Fights Back (ImageWorks, 1988)
Developed for the Commodore 64 by Denton Designs
Programming by Dave Colclough
Music by Fred Gray
Converted for the Sinclair ZX Spectrum by John Heap.
Both versions released by ImageWorks (Mirrorsoft) in 1988.

Issue #14 of the lately re-energized Reset64 magazine was to be themed around run'n'gun games, meaning the likes of Contra, Green Beret and such. To my surprise, there didn't seem to be all that many games on the C64 that would go with the relative compactness required from a magazine article, so I made two optional comparisons of Bazooka Bill and Foxx Fights Back to have the comparison chosen for Reset #14 from. As it turned out, I couldn't exactly get the comparison of Bazooka Bill finished before the intended deadline, perhaps all for the better,  for reasons I shall mention later. The intention, of course, was to eventually posting both of them on the blog as a traditional two-for-one entry.