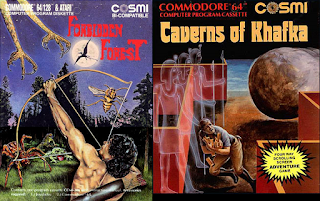 FORBIDDEN FOREST
Written for the Commodore 64 by Paul Norman. Converted for the Atari 8-bits by Vance Kozik. Published by Cosmi in 1983.


I guess there are plenty of folks out there who have been waiting for a comparison of the original Forbidden Forest, since it has that certain sort of a status, and I think I might have mentioned it in one of the Unique Games entries when the sequel was included. Well, since it was originally supposed to be done during my first year, and I'm already doing my third one, I thought I might as well finally include it in this year's Halloween set, and couple it with another Cosmi classic. Similarly to the Elite twofer last month, it's time for another versus battle between two computers with two games for the price of one. 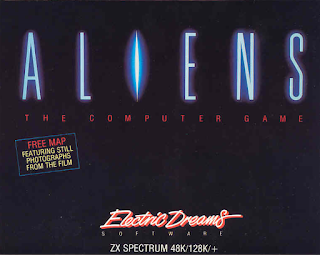 Developed by Software Studios: designed by Mark Eyles and produced by Jonathan Dean.


While not quite as atmospheric or terrifying as the original Alien, James Cameron's action-oriented sci-fi classic left its own specific sort of mark in the Alien franchise, this time allowing for a more straightforward approach to the horrors in outer space. I have to admit to being more of a fan of the original Ridley Scott movie, but the first Alien game by Argus Press doesn't have as much of content or conversions to make for quite as interesting a comparison, so I decided to go with the more popular one of the two official games based on the movie. 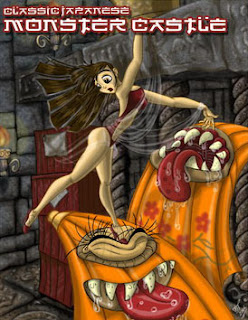 Based on Jose Gonzalez's original game Classic Japanese Monster Castle, released by LOKOsoft in 1991 for the ZX Spectrum 48k.

Concept, programming, graphics and sound effects by na_th_an. Originally released as freeware for the Sinclair ZX Spectrum 48k in 2007.

Converted for the Amstrad CPC by the Mojon Twins in 2009, powered by PSG Player by WYZ and cpcrslib by Artaburu. Uses Exomizer 2 decompressor for Z80 by Metalbrain.

Converted for the Commodore 64 by the Mojon Twins in 2010: Programming by Algarbi, graphics by Nathan Asshantti and Domingo Alvarez, music by Sascha Zeidler and Mikael Backlund.

Original cover art by Pagantipaco. Cover art for the ZX81 version by Anjuel.


It's been a long while since I did my last New Game Of The Month, so I figured it's time to dig up another one of these, since the single one I had on my research list was thematically suitable for October. This time, it's not a particularly NEW game as such, since we're talking about a game that was released 8 years ago already, but the word "New" in the series name implies games that were released long after the machines' commercial demise, so in that sense, the word is still valid. As for the selected game having much to do with our current Halloween theme... well, perhaps Classic Japanese Monster Castle isn't the most frightening title ever in any possible way, but I guess it wasn't really meant as such. But classic Japanese monsters? I admit that I'm really out of my league here, but I don't think a single-screen puzzle-platformer with creatures... well, a creature, to be more precise, just barely resembling some sort of monster that anyone could have made up move around without any inclination of appearing scary really fits the bill. But let's not get too much ahead of ourselves. 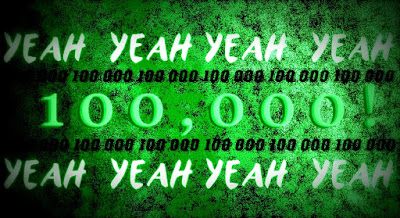 HECK YEAH!!! The number of visits to FRGCB has passed 100,000! Again, thanks for your continued interest!

Honestly, I don't really know how this would have happened, since the previous milestone of 50,000 was reached only less than nine months ago, but most of the current count was added up during my long holiday. Perhaps I should take more longer holidays then? :-D However it happened, my gratitude goes out to all of you who have brought this up. 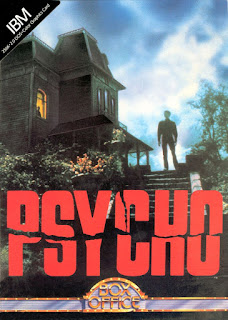 Designed for the IBM-PC compatibles by Craig Morehouse for StarSoft Development Laboratories. Programming by Scott Adams. Screenplay and graphics by Hal E. McCrery. Published by Box Office, Inc. in 1988.


It's time to get our Halloween theme up and running again, and take a look at a few horror-themed games. Like last year, our first entry into the realm of horror is a questionable item at best, and a computerized adaptation of a classic horror movie, but this time, I have picked a fairly unknown game to start the month with. Trust me on this, it has so far been unknown for a good reason, and it perhaps should remain as such, but people must be warned - or at least informed - of bad games. Besides, I know there are plenty of bad game enthusiasts out there, so this one should be right up their alley.