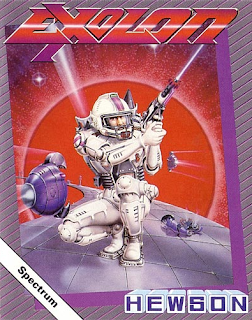 Designed and written by Rafaele Cecco for the Sinclair ZX Spectrum and Amstrad CPC. Spectrum sounds by Nick Jones. Loading screen by Nigel Brownjohn. Both SPE and CPC versions also available on Enterprise 128.

Converted for the Commodore 64 by Nick Jones, with loading screen for the Rack-It re-release by Stephen "Sir'88" Robertson.

Remade for the Atari ST by Martin J. Bysh, with graphics by Gary P. Helix and music and sound effects by J. Dave Rogers. Released by Hewson in 1988.

Converted from the Atari ST version for the Commodore Amiga by Guido Henkel for Linel/Dragonware. Released by Hewson in 1989.

Two (unofficial?) conversions for the Sharp MZ-800 written by Midos and Datelsoft in 1989.


Rafaele Cecco's games all have a certain kind of a quality, that make them all feel most at home on the Spectrum and Amstrad for some reason, but I've always thought Exolon to be one of the games that was almost equally good on every 8-bit. The 16-bit versions I never even knew of until I started doing the research for this entry, so it'll be something new to look forward to, at least for me. Exolon also has a certain amount of randomness about it, that makes it impossible to feel completely comfortable about it at any given time, and perhaps for that reason, it has never been one of my favourites, but that hasn't stopped everyone else from liking it.