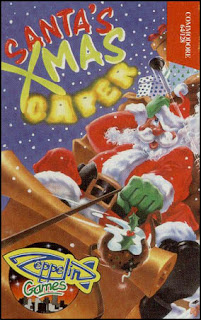 Developed for the Commodore 64 by Reflective Designs: Programming by Duncan Scott Kershaw, graphics by Tyne Base Computer Design, with music and sound effects by Mark Wilson.

Also written for ZX Spectrum in 1990 and Amstrad CPC in 1991: Programming by Ian Richards and graphics by John Cassells.

Yet again written for Commodore Amiga in 1992 and IBM-PC compatibles in 1993: Programming by The Chief Elf, graphics by David Taylor and Ted E. Bear.


Yeah, okay... when the credits section is so difficult to write, what can you expect from the game? Santa's Xmas Caper is not the most interesting game to end a year with, but somehow, it has the dubious honour of being a Christmas-themed game with the most conversions out there... or whatever. You already might have seen the Lazy Game Reviewer's video about this unfortunate little title, but since we're talking about two entirely different kinds of games with the same name (more or less), published by the same company, I don't really know whether this should have been a two-fer or not. But it's a Christmas special, so what the heck. 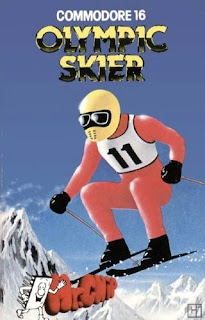 
The obligatory sports title for this winter season is a fairly small title from the early days of Shaun Southern's career, because I've got a more Christmas-oriented number planned for the big event of the year. Whether or not that one will be any good is another matter entirely, but now, let's focus on this one. 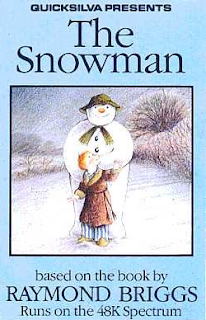 Based on the book "The Snowman" by Raymond Briggs.
Developed by David Shea for the ZX Spectrum in 1983.


It's time to start the 2015 Christmas season proper, and this time I shall be getting into another suggestion (or was that a request?) by a reader - I think it was Alessandro Grussu who mentioned this one last year. To be honest, I wasn't too aware of this game, until mr. Grussu suggested the game, so I had to take a proper look at it.

The World of Spectrum users have given 23 votes for their version, rating it with a total score of 7.67, which isn't too bad. At Generation-MSX, the game has 9 votes, with a rating of 4 and a half stars. Curiously, the C64 version has no scores whatsoever anywhere - the Lemon64 archive doesn't even have this game in its database, nor does MobyGames. I guess my lack of knowledge in this case mirrors the overall C64 population's, since I originally became aware of this game's existence due to extensive browsing of the WoS archive, but never paid much attention to it. So, let's see how this turns out. 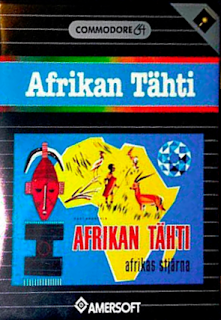 Adapted for the Commodore 64 by Otso Pakarinen & Jari Heikkinen. Produced by Jouko Riikonen. Based on the board game by Kari Mannerla, originally published by Tilgmann in 1951.


Since it's been so long since I did anything Finnish-related on the blog, for this year's Finnish Independence Day, I decided to start a new series on the blog to add some more justification for the blog's title. So, the new series is called Finnish Retro Game Reviews, which features in-depth reviews of old Finnish-made games - as a kind of extension of my History of Finnish Games entries. For my first Finnish Retro Game Review, this might seem like an odd choice, but you shall find soon enough, that there is some logic here.