The Simpsons: Bart vs. the Space Mutants (Ocean/Acclaim, 1991) 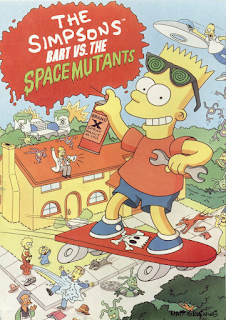 Published by Ocean Software for Amstrad CPC, Atari ST, Commodore 64, Commodore Amiga, IBM-PC compatibles and Sinclair ZX Spectrum 128k, and Acclaim for the NES in 1991.
Published by Acclaim (Flying Edge) for the Sega consoles in 1992.

On the long run, horror games is not exactly a bottomless well for trying to find games specifically with comparison in mind for Halloween, so in the spirit of transforming October from a month of horror games to a month of Ocean games (hopefully starting properly next year), I chose to go with one of the most commercially successful tie-in games of the 8- and 16-bits era with some sci-fi/b-movie theme going on in it. And, well, I had to visit the 1990's for a change, didn't I? Well, hold on to your hats and eat your shorts while at it, because this is going to be an unusually long comparison.