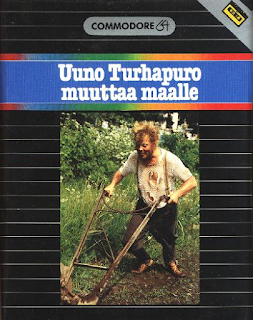 
The most obvious game to be featured in the series, Uuno Turhapuro muuttaa maalle has the honour of being  simultaneously the most frustrating Finnish game ever released on the 8-bits, and the most sought after Finnish C64 game of all time, if only because it's so well-known. The most recent spotting of the tape version of the game being auctioned at huuto.net earlier this year reached 500 euros, and the tape version is the more common one, since around 2000 copies were pressed of those, while the disk version had a much smaller print - only about a 100 copies were made! For the quality of the game, I'm hesitant to vouch for, but merely for what it represents, it has definitely earned its firm spot in the commercial history of Finnish games. 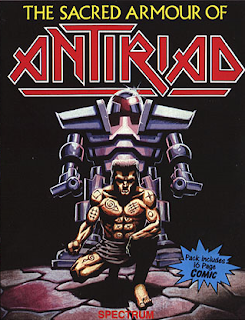 Programming by Andrew Fitter
Plot and graphics by Daniel Malone
Sound design by Richard Joseph
Originally released for the Amstrad CPC in 1986.

Converted for the ZX Spectrum and Commodore 64 by Stanley Schembri in 1986.


Now, here's a game I have to admit having an almost complete ignorance on, even though I came across it plenty of times back in the day. The Sacred Armour of Antiriad, or just plain Antiriad, as it was often referred to, never caught my fancy due to its initially awkward controls and slightly more than usually restrictive flip-screen system. Only lately I have found out that there is actually more to this game than just walking around naked in a jungle, dying randomly on things I don't understand, and since a comparison of Antiriad was suggested a good while back in a blog comment posted by Brain Breaker in 2014, I thought I might as well try and learn to play this game now, almost 30 years after its release. Better late than never, right? 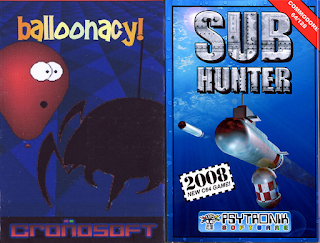 Concept based on "Crazy Balloon" arcade game by TAITO from 1980. Programming and music by Richard Bayliss. Graphics by Richard Bayliss and Hiram Kumper. Loading screen by Marq Watkin. Originally released as freeware for the Commodore 64 in 2001 by the New Dimension, and published by Cronosoft in 2003. Converted for the Amstrad CPC by Kevin Thacker, and published by Cronosoft in 2007.

Concept based on a Commodore VIC-20 game "Sub Hunt" by Mastertronic from 1984. Programming by Richard Bayliss. Graphics by Frank Gasking. Music by Thomas "Drax" Mogensen and Richard Bayliss. Originally released for the Commodore 64 in 2008 through Psytronik Software.

Converted for the Amstrad CPC by Paul "Axelay" Kooistra, with music by Herve Monchatre. Released in 2011 through Psytronik Software.


All right, so we have a curious little twofer here this time: it's simultaneously a New Game Of The Month special entry, although neither of these games are particularly new anymore, only released well after the two machines' commercial demises. Also, neither of these games are particularly original - rather remakes of over 20 year old titles, so I shall be taking a quick look at the original games the two remakes are based on, as well. 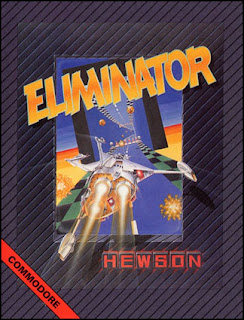 Designed and developed for the Atari ST by John M. Phillips, with graphics by Pete Lyon.

Converted for the Commodore Amiga by Linel: Programming by Christian Haller and Christian A. Weber, Music and sound effects by Roman Werner, Graphics by Pete Lyon, Title screen by Michael Tschoegl.

Converted for the Commodore 64 by Tim Rogers, with graphics by Darrin Stubbington and Hugh Binns, title screen by Stephen "SIR" Robertson and sounds by Jeroen Tel for Maniacs of Noise.

All versions released in 1988 by Hewson.


Here's something that this blog hasn't featured in quite a while: a game that was made for all three principal 8-bit computers, that these sorts of comparisons usually are focused on, as well as the two next-generation computers that went through a similar battle of "whose reproductive organs are more appropriate for the job" as the three 8-bits. If only the MSX and 8-bit Atari computers were included here, it would be perfect. But curiously enough, Eliminator was first made for the 16-bit Atari, so that's something to consider with a bit of seriousness. Particularly as it is also one of the select few three-dimensionally behaving games featured on the blog so far. And if that's not reason enough to write about Eliminator, then at least having included it in the teaser picture in last August should give me some excuse to do this now.