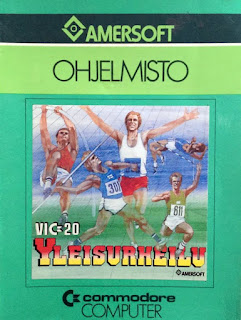 Written by Juha and Mika Salomäki for the Commodore VIC-20 and C64.
The C64 version was published in 1985.


It's that time of month again to do another Finnish Retro Game Review, and for now, it shall be the last one for a while. There is a good reason for it, though: I'm going to focus my time I would usually spend on writing the FRGR entries on something much bigger, but loosely related to the topic. Now, though, the tenth game in the FRGR series is about another game which will require plenty of translating, which is also the first - and so far, the only Finnish multi-event athletic sports game: Amersoft's Yleisurheilu for the VIC-20 and C64. Naturally, having been released for two computers, this is also a comparison of sorts, but not quite in the same manner as a game released for two computers from two different manufacturers would be. 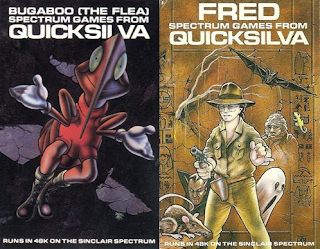 Originally written for the Sinclair ZX81 as "La Pulga" by Paco Suárez Garcia, but was, and remains officially unreleased.

Re-written for the Sinclair ZX Spectrum by Paco Suárez Garcia and Paco Portalo Calero, and published through Quicksilva in 1983.

Converted for the Amstrad CPC by Paco Suárez Garcia, with graphics by Juanjo Redondo, and released through Amsoft in 1984 as "Roland in the Caves".

Converted for the Commodore 64 by Pedro Ruiz, with graphics by Ángel Domínguez and music by Félix Arribas, and published through Quicksilva in 1984.

Written for the MSX computers by Steve and Ann Haigh, and published through Quicksilva in 1986.

Written for the Commodore 64 by Pedro Ruiz, and first published in the UK by Quicksilva in 1984.

Also converted for the Texas Instruments TI-99/4A by Arnd Russmann, and released as "Freddy" by Saurussoft in 1985.