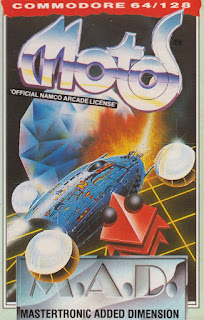 Design by T. Okada
Programming by Kosei Matz
Music by Norio Nakagata
Graphics by Satoru Chan
Engineering by SIG-EL
Debugging by M. Taguchi
Supervising by Sing Kozima
Originally released for the arcades by Namco/Dempa in 1985.

Converted for Sharp X68000 by Yodel, with sound by Hideya Nagata. Published by Dempa Microcomputer Software in 1989.

One thing Mastertronic never got properly recognized for was their arcade conversions, mostly because they didn't do all that many of them, and those that they did were largely made after they merged with Virgin Games in 1988. Prior to that, Motos represented one of Mastertronic's earliest ventures into arcade game licencing. This could have been one of the reasons why the eventual merging with Virgin was necessary, since Motos wasn't really one of the most celebrated arcade games in its time. Now, though, it makes an interesting study. 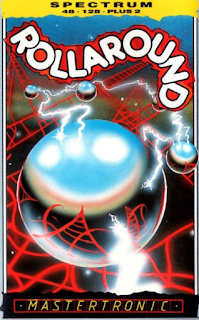 All versions were written in 1987, and published by Mastertronic in 1988.

I don't often feature isometric games on this blog, mostly because I'm really not a big fan of them, but there are some odd exceptions here and there. Tony Kelly's Rollaround is one of them, if only because it happens to be one of the first tape games I got by a chance in a bundle, when I started collecting C64 tapes after the emulation period had been going on for a few years and my C64 hadn't been properly in use for a while. It's also a fairly rare occurence, that an isometric action game was originally designed for the C64, which should make this comparison a bit more interesting than were it not. 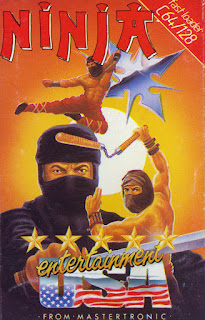 Designed and programmed by Steve Coleman, with music by Rob Hubbard. C64 loading screen by Jim Wilson. Originally released for the Atari 8-bit computers and Commodore 64 in 1986 by Mastertronic.

Converted for the IBM-PC compatibles by Bryan Brandenburg and Soft Arts in 1986.

Converted for the Sinclair ZX Spectrum by Icon Design Ltd. in 1987.

Converted for the Amstrad CPC by Brian Beuken of Icon Design Ltd. in 1987.

Released as "Ninja Mission" for the Atari ST and Commodore Amiga in 1987, and for the Arcadia in 1988 by Mastertronic.

Welcome to the second Mastertronic May at FRGCB! With any luck and time on my side, there should be three games to be dealt with this month, much like last year, and we shall start with a relatively big one: Ninja from Sculptured Software, designed by none other than Steve Coleman, who is also responsible for such classics as The Pharaoh's Curse and Rainbow Walker, as well as the 8-bit Atari conversion of Raid Over Moscow.