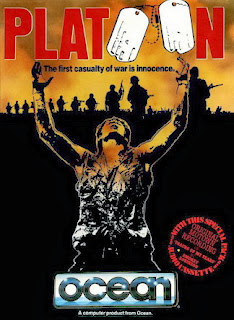 Since 1979, video games have been made based on movies. The year 1982 saw the first proper licensed video game based on a movie: Raiders of the Lost Ark on the Atari 2600. Since then, there were many big hit movie-games and some less big, like Alien from Argus Press, Rambo: First Blood part II and The NeverEnding Story from Ocean, Back To The Future from Electric Dreams, A View To A Kill and Friday the 13th from Domark, Ghostbusters from Activision, The Evil Dead from Palace Software and many others.

In 1986, Oliver Stone wrote and directed an award-winning war drama called Platoon, currently at #149 in the IMDb Top 250. The movie is not so much about the action and bloodshed, but instead focuses on the duality of man and the psychological impact a young man faces when put on the battlefield of Vietnam. Since the movie was such an enormous blockbuster, the game industry immediately sensed a good tie-in license for a game. Of course, it would have been impossible to make a war game based on something as abstract as psychology, so Ocean Software designed a fun multi-genre jungle shooter based on some of the more actiony scenes from the movie. That should work, right...? 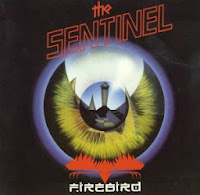 Released in the United States as "The Sentry".

This is the second time in my blog's history to feature a game by the great Geoff Crammond. The reason why I'm writing about The Sentinel now is because I feel it hasn't had enough exposure lately. The last time any larger collective was interested about this game was probably in 2006, when two different programmers were working on a remake of the game for the Retro Remakes competition, both of which were rather nice. It's not really one of my favourite games as such, because the original game's controls kind of put me off, but it's definitely one of my favourite concepts ever. The sequel, Sentinel Returns, from 1997 for the PC (Windows 95) and the original PlayStation, was more my thing because of the mouse aided control system and better graphics.

Whatever my personal opinion on the game is, the general opinion seems to be very generous. Although I couldn't find any rating numbers for the BBC Micro and DOS versions, the C64 version has been given a score of 8.3 by 97 Lemon64 voters; the ZX Spectrum version has a whopping 8.53 from 206 WoS voters; CPC Game Reviews has given it a 9 out of 10; 77 Atarimania voters have given the ST version a measly 5.9, and LemonAmiga has a score of 8.1 with 41 votes. 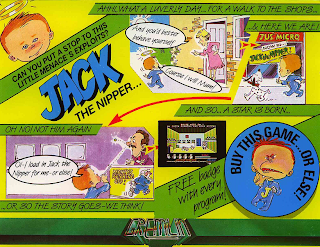 A relatively quick comparison this time, just to catch up on my imaginary quota. This game was requested by one of my band mates a while ago, so this one goes to Tero H., thanks for the suggestion. The reason why I did not make this a two-fer and include the sequel is simply, that I never got anywhere in Jack The Nipper II: in Coconut Capers, so I'm not anywhere near qualified enough to talk about it.

The original Jack The Nipper has a certain status in gaming history - not because it was in any way unique, but because it's loaded with a sense of humour rarely seen in games like these. The game has an overall respectable score on every platform it was released on: World of Spectrum users have given it a 8.25 with 93 votes, almost bringing it into the Top 100 list; Lemon64 users have given it a 7.1 with 55 votes; at Generation MSX the game has a rating of four stars out of five, with 14 votes, and at CPC Game Reviews, the game has earned a whopping 9 out of 10. Considering the game's genre, the Amstrad version actually might have a fair chance at topping our comparison this time. But let's see... 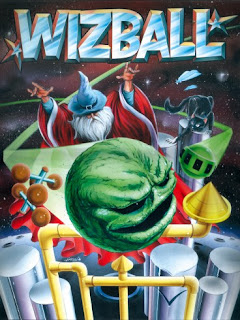 Wizball appears to be one of those games that will always divide the audience, depending on whether you can learn it or not. I've read from a lot of forums people saying that the game is overrated, because they either never understood the hype or couldn't get a grip on the controls or whatever. Sure, it's a very fantastical idea and doesn't involve much real world physics or anything, but isn't that one of the basic ideas behind gaming? Interacting with your dreams.

Regardless of it being called overrated, Wizball is placed at #34 with 242 voters having rated it 8.51 at Lemon64's Top 100 list. At World of Spectrum, the game has a score of 8.06 from 51 votes, which isn't bad at all, although it doesn't reach the top 100. Atarimania has the ST version rated 7.6 with only 13 votes, and the Amiga version takes the low end with only 5.9 from 58 LemonAmiga voters. Although proven slightly less trustworthy in their opinions in some of their reviews, the folks at CPC Game Reviews have given it a whopping 9 out of 10. The DOS version was the most difficult for finding any reviews and ratings, but at least the good old Home of the Underdogs has a Top Dog mark on it. So, let's see how the ball rolls, shall we?