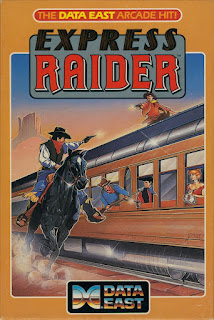 Developed by Data East Corporation and released for the arcades in 1986. Released in North America as "Western Express".

Some time ago, Reset64 magazine had a train theme on their 13th issue, which inspired me to dig out one of my old C64 favourites, an arcade original called Express Raider, which I had on a compilation called Arcade Alley, a relatively rare compilation with only games by Data East. Ported only to the three major 8-bit home computers, Express Raider seems to be somewhat of a cult classic that's rarely spoken of, but mostly with very rose-tinted glasses stitched over the old gamers' eyes. 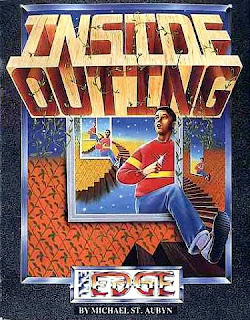 Originally published for Amstrad CPC, Commodore 64 and Sinclair ZX Spectrum by The Edge in 1988. Alternative titles were "Raffles" in Germany and Epyx's release "Devon Aire in the Hidden Diamond Caper" in North America.

FRGCB's long time readers might recognize my general indifference towards isometrically viewed 3D arcade adventure games, but the keyword there is "general". I do like them when they are comfortable to play, and The Edge's Inside Outing just about crosses that threshold for me, which is why I've had this game lurking for its moment on my to-do list for a few years now. A request from a Lemon64 forum user by the name of MinerWilly (apparently a fellow countryman, too!) forced me to finally let this beast have its share of blog space.