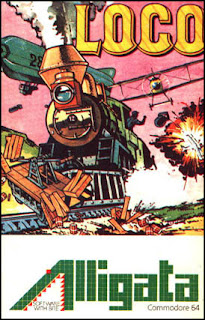 Based on the 1982 Sega arcade game "Super Locomotive", originally designed and programmed by Fukumura Mizunaga.

Commodore 64 version by Antony Crowther, with music by Ben Daglish. Published by Alligata Software in 1984.

Spectrum and Atari versions published by Alligata Software in 1986.


When I was called on to write yet another Format Wars article for the Reset64 magazine many, MANY months ago, there was a thematic twist to this request. It took a while to realize that the only thematic game that's possible to write a comparison about that would fit the magazine is Loco from Alligata. Even that was a bit questionable, because, after all, the game is based on an arcade game with a different title, and there are a few other variants based on the same original that it would be impossible to fit all that into a magazine format comparison. Therefore, it was decided and agreed that the article should be focused and limited to precisely the three versions of Alligata's Loco. Obviously, this blog edition features a bit more. However, as the current Reset issue in-the-making is still in such a state for an undeterminable time, I was given permission from mr. Tilley, the chief editor, to post this entry before the magazine gets out, so for the first time ever, you'll get to read the long version before the short version. The magazine pdf and purchase links will be eventually added here when it's finally available. Now then... 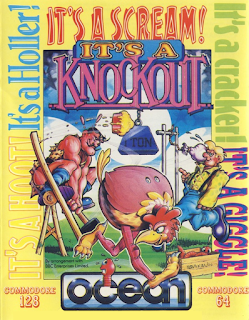 Commodore 64 version programmed by Keith Purkiss, R.P.P. and D.A.W., with loading screen by Simon Butler and music by Fred Gray.

Published by Ocean Software in 1986.


I promised you some more Ocean awfulness after Knight Rider, didn't I? Don't get me wrong - I love old Ocean games, particularly the 1985-1989 period, but even they had their fair share of trash in their catalogue. Well, here's an old BBC gameshow made into a relatively unknown computer game, and it fits in well with Ocean's other miserable TV-licence games, although it's definitely a very different beast compared to Knight Rider, Miami Vice and Street Hawk. See, this is a multi-event sports game, if you can call it a sports game as such. If nothing else, it's good enough to add an entry under the letter 'I' in the archive, but I know some of you love badness just as much as I do, when you can laugh at it, so It's A Knockout! might just fit your bill.