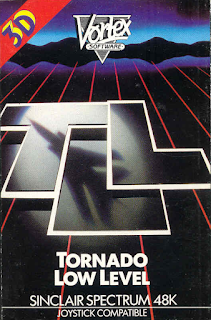 Written by Costa Panayi for the ZX Spectrum.

Amstrad CPC conversion by David Aubrey Jones for Discovery Software, and published by Vortex in 1985.

Commodore 64 conversion by Simon Nicol, with music by David Dunn; published by Ocean in 1985.


Well over three years into the blog's life, I think it's about time I made a comparison of a game by the great Costa Panayi, the man responsible for such Spectrum classics as Highway Encounter, Cyclone and Deflektor. TLL, the official title abbreviated from the alternative full title "Tornado Low Level", was my first step into the world of games by Costa Panayi. At the time, I was only about 4 years old, so I didn't pay much attention to who made the games I was playing, nor did I realize or care about what a legendary man he was to become, but I did notice, how extraordinarily different TLL was from other games around at the time. Naturally, I didn't understand how to play it, but I recall it being one of my brother's favourites, so this one goes out to him. 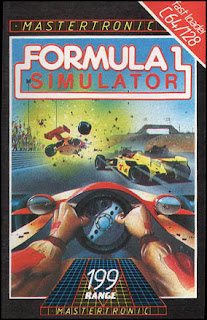 Developed and produced by Mr. Chip Software for the Commodore 16 and Commodore 64 in 1985.
Programming and graphics by Shaun Southern.
Additional graphics for the C16 version by Michelangelo Pignani.
Music for the C64 version by Rob Hubbard.

Another game from 1984 called "Formula One" was written by S.C. Stephens for the ZX Spectrum 16k/48k, and was published by Spirit Software in 1984.
An enhanced version of it was released as "Formula One Simulator" by Mastertronic in 1985.

Credits for the Amstrad CPC and MSX versions are currently unknown, but both were released by Mastertronic in 1985.


Reportedly the best-ever selling title from the Mastertronic label was curiously this rather straight-forward racing game, rather Codemasters'ly titled Formula 1 Simulator. Shaun Southern has been mentioned a couple of times before on this blog in more flattering circumstances, but I decided to take a look at this little under-appreciated title from his catalogue, because of how different the non-Commodore versions are. So, practically, we have another two-for-one article on our hands, for a change! 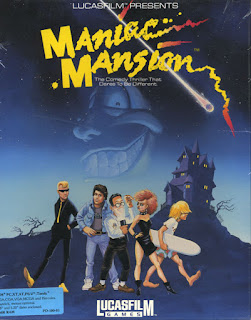 Converted for the IBM-PC compatibles by Ron Gilbert, Aric Wilmunder and David Fox, with sounds by David Hayes and David Warhol. Released in 1988 by Lucasfilm Games.

Converted for the Commodore Amiga and Atari ST computers by Aric Wilmunder, Edward Kilham and Steve Hales. Sound effects for the Amiga version by Brian Hales, and for the Atari ST version by David Warhol and Daniel Filner. Released in 1989 by Lucasfilm Games.

Converted for the Nintendo Famicom by Jaleco in 1988, and released only in Japan in 1989.

NOTE: In the above list of credits, you only see the most directly involved personnel. If you are interested to see a more thorough list, visit MobyGames.


In the light of Lucasfilm Games' first actual graphic adventure game having its 30th anniversary this year, I decided to write about their next game in the line, because Labyrinth turned out to be a bit impossible to write about due to its versions for Japanese computers. Also, I was planning on writing about Maniac Mansion for this Halloween, but due to unforeseen circumstances, things got delayed. But also, it could well be, that SCUMM also celebrates its 30th anniversary this year - it hasn't been documented that well, really: the only known facts are that Maniac Mansion was released in October, 1987; the idea of the game was conceived around 1984-85; and that its actual development took 18-24 months. Make of it what you will. So, while I'm running late on getting a second game for the Halloween theme, I thought I might as well extend this season a bit.