A History of Finnish Games, Part 2 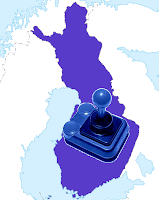 At the end of Part 1, we had just decided to give up on the Commodore 64, and we had moved to the Amiga and Atari ST. When modems started increasing in homes and other, more community-based distribution methods began to develop and thrive, our indie games and their developers didn't have much place in world computer and video gaming press, but there was a lot of interesting things going on in our so-called cottage industry. We continue now with the 16-bits and move on simultaneously to the PC indie gaming scene, somewhat covering the years 1990-1996. If you haven't done so yet, and wish to read the first part before heading on with this post, check it out here. 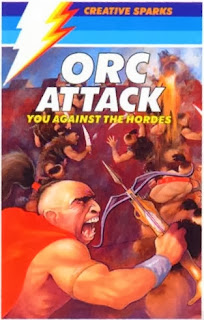 Because my last blog entry was such a hugely time consuming job, I decided to take an easier job this time. By the suggestion of a World of Spectrum user who goes by the name of "fog", I decided to have a go at this game, which looked easy enough to make a reasonably short piece for once. It's a pretty unknown game for me, so it's still a challenge, but in a completely new way.

Retro gamers seem to like it enough at the familiar sites: WoS users have given it 7.79 with 49 votes, at Lemon64 it has a slightly lower score of 7.2 from 28 voters, and 29 Atarimania voters have given it 7.6. So it's not a particularly well known game, based on the number of votes, but it looks to be well above average. Let's have a look, shall we? 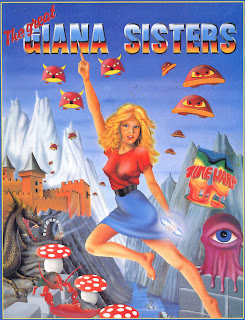 Converted for the Amstrad CPC in 1988 by Spiky Productions.

Converted for the MSX2 in 1993 by Jan van Valburg for MGF, and published by Sunrise.

Also converted for the ZX Spectrum in 1988 by Ian Richards from Source Software,
but was ultimately left unreleased, and is currently impossible to find.

This is a really big one, so grab some pizza or coffee, you're gonna be reading this a looong time. 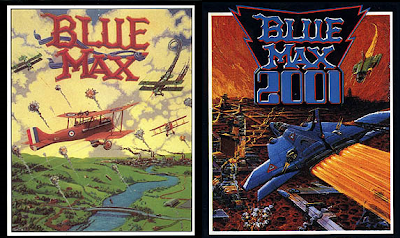 Here's a duo of games that you probably didn't expect too soon to appear here, but for some reason, I have a strange fondness for this twosome. Yes, even Blue Max 2001, even if it is universally thought of as the idiot bastard son of the original Blue Max. I won't be dwelling into my past too much, but I'll say that inexperience has its advantages.

Before I get to my second two-for-one, which will be posted hopefully on Monday, I got around to writing this update on my earlier comparison of Bruce Lee. 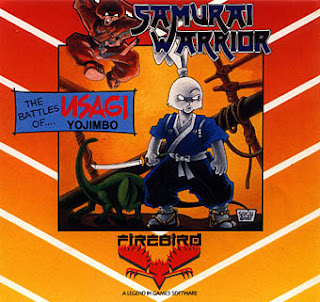 Based on the Usagi Yojimbo comics by Stan Sakai.

Back in the 80's, fighting games were brilliant. Most gamers loved them regardless of how unrealistic the controls and character animations were, but then, you couldn't expect too much because you  would be playing them most likely on an 8-bit machine. Nowadays, the old games look and feel... well, old. The level of realism and graphics are so high in the latest Tekken, that it doesn't really feel much like a game anymore. The time you will spend on studying the movements to get your preferred combos and everything to perfection, takes about as much time as taking a course in your prefered martial art and learning to perform some of the movements yourself, and it'll be useful in real life as well.

The old beat'em up games, however, were just that: games. You'd pick them up and learn to play them in a minute, and depending on your level of concentration, skills to use the few moves available, and a great amount of luck, you'd be able to get quite far. That was the case with most of the beat'em ups back then - The Way Of The Exploding Fist, International Karate, Kung-Fu Master... you know.

Then, the guys who made the Exploding Fist, gave us Samurai Warrior: The Battles of Usagi  Yojimbo. Most of us probably still look at it with slightly rose-tinted glasses, but back then, it was a very different gaming experience to anything, and it still is. The game is currently rated 8.6 at Lemon64 from a total of 199 votes, and is ranked #26 in the top 100 list, from games with at least 100 votes. CPC Game Reviews has given it an 8 out of 10, and 67 World of Spectrum voters have rated it 8.17, but it doesn't quite reach the current top 100. So, whichever the platform, it's still quite highly regarded in the retro gaming world. 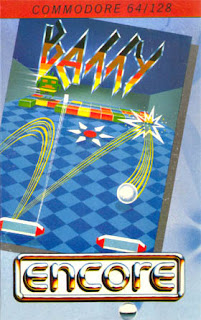 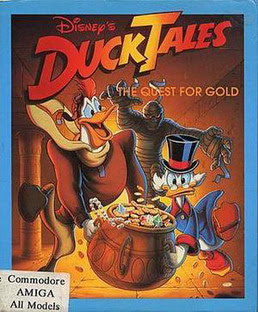 It's not the most popular game from the turn of the 1990's, but it's fondly remembered by those of us who grew up with it. Disney, in general, have always been a big thing, and DuckTales was no exception back then, although the TV show only lasted for 3 seasons. It was rare to have a good game to be based on our favourite cartoon characters, so when DuckTales was released, it was huge for a while. Now that the remastered version of the NES game has been recently released, I thought it might be nice to have a look at the other DuckTales game, that most of us who didn't have a Nintendo back then, know better.

While this review was written, as small a number as 29 of Lemon64 members have voted it 7.3, and Lemon Amiga has a rating of 7.41 from a total of 71 votes. Abandonia users rate the PC version 3.1 out of 5, while the editor has rated it 4.0. Atarimania has a rating of 7.0 from only one voter, but then the game is a bit harder to find for the ST. Wikipedia says a version for Apple ][ was also released, but I haven't been able to find one, so it's left off from here.