Designed by Rieko Kodama for Sega Enterprises, with music by Katsuhiro Hayashi. Originally released for the arcades by Sega in 1986.

Conversion for the Sega Master System (Mark III) written and released by Sega in 1987. Released in Japan as "Double Target - Cynthia no Nemuri"

Converted for the Commodore 64 by Sega: Produced by Jonathan Dean, Music by David Whittaker. Published through Activision in 1987.

Converted for the ZX Spectrum by Probe Software: Programming by Antony R. Lill, Graphics by Nick Bruty. Published through Activision in 1987.

Converted for the Amstrad CPC by Probe Software: Programming by Anthony Heartley. Published through Activision in 1987.


Admittedly, this isn't one of Sega's most successful games of all time, particularly when it comes to the home conversions. However, due to its limited exposure, I thought Quartet would make for a nice alternative against all the more obvious games, and besides, there aren't too many games that begin with the letter Q that would be interesting enough to fit into the blog. But what makes Quartet a properly interesting game is the fact that it was released just a bit after Atari's Gauntlet - another four-player action game was doing high profit in both the arcades and home computers. Not too many game companies would have the guts to try and achieve the same level of success with something quite a bit different. As you might already know, the home conversions of Quartet left a lot to be desired on every platform, but can you really blame the conversion teams for their attempts?

Over half a million visits this blog has had already, and the rate at which this number grows, only seems to be getting quicker. So, half a million thanks to everyone of you out there - let's see if we can't get it up to a full million within the next year, so we can have a proper celebration! 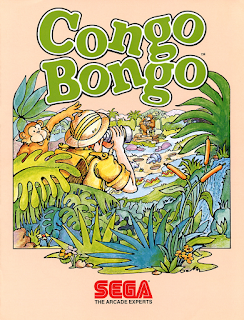 Developed (at least partly) by Ikegami Tsushinki for SEGA Enterprises Ltd., and released originally for the Japanese arcades as "Tip Top" in 1983.


Here's another early Sega classic for you, and our game for today is perhaps not quite as obscure as the last one. This time, I'm picking up one of my friend Bob's favourite games, Congo Bongo, which was basically Sega's attempt at cashing in on the success of their earlier collaboration with Konami on Frogger, as well as Nintendo's Donkey Kong. According to Wikipedia, it wasn't much of a success when it was released, but despite of it, Congo Bongo was ported to nearly every major gaming platform at the time, and uniquely, the C64 was given two different official conversions, as if someone was trying to apologise and make up for making such a mess the first time around. Weirdly, as with most other Sega's early games, the game's developing and porting team credits are well kept secrets for the most part, but there are indications in the game's original arcade ROM to it having been likely coded at least in part by the company Ikegami Tsushinki, who also worked on Donkey Kong and Zaxxon. If anyone finds out more about the credits for any version, please drop a line in the comments section. 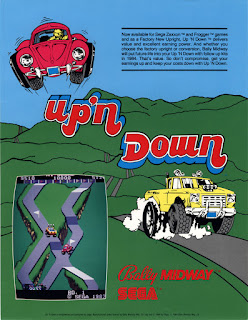 Designed by Yoji Ishii.
Developed by SEGA Enterprises Ltd., and released for the Japanese arcades by SEGA, and for the North American arcades by Bally/Midway in 1983.


This month, I shall be focusing on Sega's old arcade titles, starting with this slightly lesser-known title to give some filler for the other end of the alphabetically ordered list. The popularity, or at least the becoming of more common knowledge among 80's gamers of Up'n Down, I believe, can be credited mostly to piracy. At least from what I can remember, it was one of those games that was most likely to be featured on any C64 gamer's collection of either turbo tapes or disks full of single-filed games. I'm pretty sure it must have been the same story for Apple ][, 8-bit Atari and IBM-PC communities back then, but I can only attest to the game's C64 spreading. Although Up'n Down along with a few other games from Sega were to be converted for both ZX Spectrum and Amstrad CPC, this was one of the games that sadly never got released, but we're still hoping for a prototype or something to appear. Not only that, but there was supposed to be an SG-1000 version of the game, which was reportedly advertised in Japan and Finland of all places - that one never appeared either. As it is, though, seven different versions is already a lot to take in and write about.