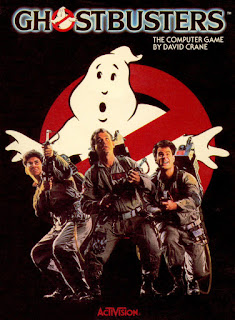 Converted for the Apple ][ by Robert McNally, and released by Activision in 1984.

Converted for the Atari 8-bit computers by Glyn Anderson, with graphics by Hilary Mills. Released by Activision in 1984.

Converted for the Atari 2600 by Dan Kitchen and Adam Bellin, with graphics by Hilary Mills. Released by Activision in 1985.

Converted for the MSX computers by Robert Rutkowski, and released by Activision in 1985.

Converted for the IBM PCjr and TANDY 1000 and their compatibles by Robert Rutkowski, and released by Activision in 1986.

Conversion for the Sega Master System done at Activision, and published by SEGA of America, Inc. in 1987.


This year's Halloween theme will likely only consist of one game, but it's a rather big one - in fact, it's the biggest single comparison I've written so far, so prepare yourselves with plenty of coffee or other refreshments to keep you awake. Sorry to make the Halloween month so short this time, but these things do take quite a bit of time to prepare properly, which I don't really have too much these days. With all that crazy commentary having been going on about the recent reboot/remake of the film series, I forced myself not to take part in it until after the whole circus had quieted down and I had actually seen the movie myself. Not that seeing the new movie would have anything to do with my writing of this blog, other than for making me do the obvious statement, that Ghostbusters really is a classic 80's movie, and shall always remain as such, in both good and bad, even though I cannot but feel that the 2016 Ghostbusters movie was unfairly prejudged. I didn't think it was as bad as it could have been, but it certainly cannot beat the 80's version. But more than being a classic 80's movie, it is also almost solely responsible for making movie-licence games a viable marketing plot; after all, it was Activision's best-selling game until 1987.