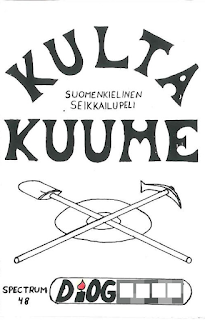 Written by Marko Aho and Kari Aaltonen for the Sinclair ZX Spectrum in 1985, and published by Triosoft in 1986.


The series of Finnish Retro Game Reviews continues from where my series of a History of Finnish Games began. This will probably be the shortest entry in the history of FRGCB, because it's a review of a text adventure game. Well, at least it has some graphics, so it's not going to be a completely barren entry in that way. Too bad the cover art and the loading screen have been lost in time, and the only downloadable version currently available is a .z80 file (inside a .zip archive) at Marko's old website, which was last updated in June 2007 (EDIT 29th of May, 2019: Correction - the last, long awaited update was two days ago!). In any case, Kultakuume (Finnish for "Gold Rush") was the only commercially released Finnish text adventure game for the ZX Spectrum, and it was made with Gilsoft's The Quill Adventure System from 1983 and The Illustrator from 1984. It was also one of only three commercially released Finnish ZX Spectrum games, the third of which is a golf game which hasn't been found yet. 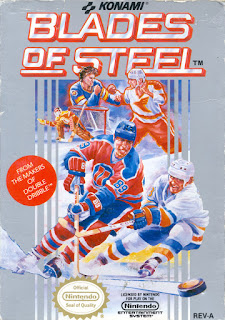 Conversion for the Commodore Amiga and IBM-PC compatibles by Novotrade: Programming by Peter Agocs, Judit Buczolich and József Szentesi. Graphics by Zoltan Hoth. Released by Konami in 1990.


Converted for the Commodore 64 by Antal Zolnai for Novotrade, and released by Konami in 1990.

Converted for the Nintendo Game Boy by Konami: Directed by Y. Nakanishi. Programming by Y. Nakanishi and S. Tamate. Character design by Nobuaki Matsumoto. Music by Hidehiro Funauchi and Akiko Itoh. Released as "Konamic Ice Hockey" by Konami in 1991 in Japan. Released as "Blades of Steel" by Ultra in 1991 outside of Japan.


Happy New Year, everybody! Let's start 2017 with something cheerful and fitting for the season: ice hockey! Since the blog has already featured my all-time favourite hockey game - Hat Trick, there is only one other game of this particular sport that can be considered good comparison material. Curiously enough, my initial research into Blades of Steel faced a peculiar obstacle: no source seems to have any knowledge on the team behind the original arcade game. Even the "thank-you" sections in the NES and Game Boy credits list the original arcade team as exactly such. Mysterious, isn't it?