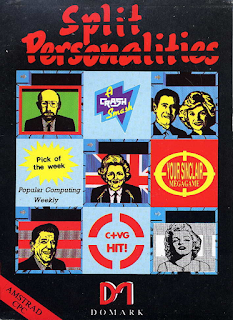 Developed for the Sinclair ZX Spectrum by Ernieware:
Programming by Ruud Peske
Graphics by Ernest Peske
Music by David Whittaker
Other credit by Mark Strachan

The Spectrum, C64 and Amstrad versions all published by Domark in 1986.

Commodore Plus/4:
Programming by Mark Greenshields
Graphics and music by Richard Naylor
Published by Domark in 1987.

Rewritten for the Nintendo Game Boy as "Splitz" by Richard Naylor for Enigma Variations Ltd.,
and published by Imagineer Co., Ltd. in 1993.

One of my favourite puzzle games of all time has always been Split Personalities, and it's also one of the rare games I managed to play on the three main contestant platforms in their own time. The Plus/4 version was unknown to me until I decided upon making a comparison of this game. Learning about its origins was a long time coming, though - the latest bits of information have, indeed, only surfaced last year, which makes this a particularly interesting game to talk about right now, particularly as the animation show it was originally based on has made a bit of a comeback lately, after an absence of almost 24 years. 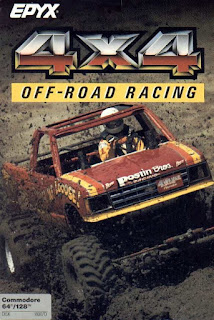 All other credits are currently unknown.

Published for Amstrad CPC, Commodore 64, Commodore Amiga, IBM-PC compatibles, MSX and Sinclair ZX Spectrum by Epyx for the North American market, and U.S. Gold for the European market in 1988.

Since restarting the comparison blog in late 2019, I've been trying to avoid writing about games that are bound to be heavy work for a comparison. But now that the comparison of Exploding Fist is done, the next logical step (if such logic exists) would be an Epyx game, but I didn't want to write about any of the other sport games quite yet, nor about Impossible Mission, because I've never really understood it, and there are just too many versions to bother with it. So, this presented a puzzle for a long while, until the answer was presented to me by a reader called Zaltys on the 5th of June 2020 - thanks again for the suggestion, and sorry for the delay! Not only does this bring another game into the numerals in the comparisons archive, but it also gives me a chance to really dive into a game I've long meant to, but have always postponed it due to lack of inspiration and time. Besides, it's about time an Epyx game, that is not part of their multi-event sports series, is featured on the blog.