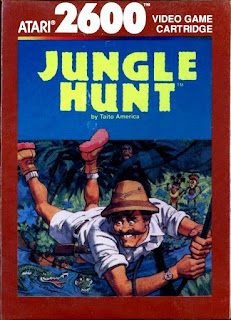 Originally developed and released for the arcades as "Jungle King" by Taito Corporation in 1982, but later re-released as "Jungle Hunt" and re-worked as "Pirate Pete".

Both versions published by Atarisoft in 1984.

Unofficial conversion "Jungle Queen" for the Tandy TRS-80 CoCo written by David Shipka, and published by ZoSo Software in 1984.

Unofficial port of Jungle Hunt from ColecoVision to MSX written by Muffie, and published by ICON Games in 2008; re-released by Repro Factory in 2014 as part of "Muffie's Tutankham & Conversions" compilation cartridge.


Once again, we're heading into classic arcade territory, which means plenty of different versions, but due to the relative simplicity, I'm expecting this to be relatively easy to get through. Mind you, digging up through all the different platform-specific archives online, I didn't expect to find quite as many unofficial conversions for all the machines as I ended up finding. I guess it only goes to show,
just how big of a classic we're talking about here.