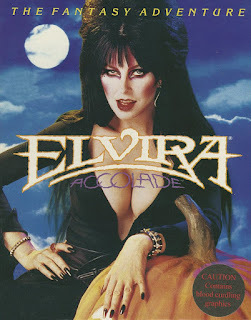 
WARNING: This entry contains somewhat disturbing in-game graphics. Proceed at your own risk.

The final Halloween-themed comparison article for FRGCB is dedicated to everyone's favourite - and only - mixture of cleavage and gory horror adventuring based on a horror/comedy movie based on the weekly KHJ-TV horror movie presentation show, Elvira's Movie Macabre. To most of us non-Americans, Cassandra Peterson's career was mostly visible due to Elvira, and she did make a career out of the character, encompassing two feature films, the original Movie Macabre and two reboots of the show (the other one was called 13 Nights of Elvira), a good deal of special cameo appearances in various other TV shows and movies, and she even recorded several songs for Elvira's Halloween music compilation albums. Interestingly, Elvira was originally considered to be the voice for the ending speech in Michael Jackson's song "Thriller" (written by Rod Temperton), before Vincent Price was chosen. Anyhow, Elvira, the brand, is still very much alive, which you can see clearly from visiting her website. Now, enough of advertising, let's get to the actual meat of the matter. Worry not, though - even though I've taken enough time to work on this, this entry isn't super-lengthy.