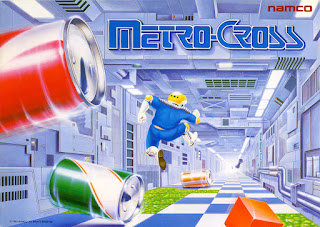 Originally developed and released for the arcades by Namco Ltd. in 1985. Designed by Masanobu Endo, Tatsurou Okamoto and Yukio Tahahashi. Programming by Kyota Tanaka. Graphics by Hiroshi Ono and Yuki Kasukawa. Sounds by Nobuyuki Onogi. Illustrations by Satoshi Kitahara.

Converted and released for the Nintendo Famicom by Namco Ltd. in 1986; no further information available.

Converted for the Commodore 64 by Probe Software: Programming and sounds by Brian O'Shaughnessy. Graphics by Vakis Paraskeva. Produced by Fergus McGovern. Published by U.S. Gold (EU) and Epyx (US) in 1987.

Also converted for Amstrad CPC and Sinclair ZX Spectrum by Probe Software in 1987; no credits are known.

Atari ST version programmed by Timothy Moore, and published by U.S. Gold in 1988.

Converted for the Sharp MZ-700 by Kazuhiro Furuhata, and published by Namco in 1989.

The Atari ST version unofficially ported for Commodore Amiga by Wanted Team in 2013.

Back to more arcade cult classics. This time, the game under the magnifying glass, Metro-Cross, was the ninth-biggest arcade table in Japan in 1985, but it was rarely encountered elsewhere in the world. In fact, the International Arcade Museum website lists Metro-Cross as one of the least common games among collectors, with a 6 out of 100 in popularity based on census ownership records (1 being the least common). Taken that into consideration, all the European conversions must have been made after finding out about this game through the Famicom port from 1986. But that's just guessing. My personal introduction to Metro-Cross happened on the C64 around the mid-90's when the local C64 scene in my area had already turned more to Amigas and consoles, but because it never came up in anyone's collection on other platforms, it felt like such a hidden gem, which I still think it is.