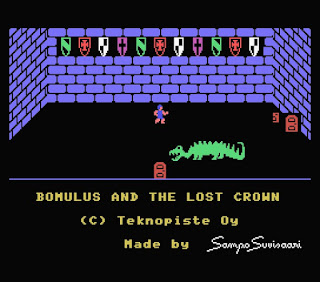 
Bomulus and the Lost Crown is a flip-screen arcade adventure, loosely on the same basis as Atic Atac and Pyjamarama, only without any weapons or other clear ways to defend yourself, or even swift movement or anything you could call a modern gaming comfort. Boy, that didn't start too positively, did it? You, as Bomulus, are given the job to find the king's titular lost crown, as well as gather up letters on pergaments to make up a password to get through the northern door in the starting screen.

Easier said than done, as it usually is. As far as I can tell, the game map is made of 24 rooms, some of which are waste of space and some of which contain such puzzling puzzles, that only with perseverance and/or luck you will be able to solve them all. The password itself has nine letters, which should become rather obvious once they have been collected for anyone even vaguely familiar with the Arthurian legend. However, the password will only become useful once you have found the lost crown, so you might as well skip your first attempt at entering the northern door. On your second attempt, you need to have the crown with you, otherwise you will automatically get killed, and it's Game Over.

As you might gather from that, you only get one life for the entire game, which is a bit annoying, since there are various dangers within the castle walls that will kill you, unless you approach them holding a certain item. Certain other dangers will kill you regardless of having any items with you, so you really do need to be careful here. At least you can safely assume, that if you see something animated, it's potentially dangerous. The game often has a very particular sort of collision detection, so you also need to learn how to approach and how to avoid certain enemies and other dangerous things. I guess it helps, that you can only move straight vertically or horizontally, no diagonals possible. There is an action button in the game (space bar), but it's rarely useful, because most of the interaction with other characters happens by either colliding with them or colliding with something else connected to them.

Although the game doesn't indicate it properly, you can only carry one item at a time. You can find your previously held item having been returned to the place you originally picked it up from, if you happen to swap it for something else. Since the game isn't very quick, and any additional animation added to your presence will render the gameplay even slower, this method of item swapping can become rather tiresome.

Perhaps it wouldn't be so bad, if there was enough variation in graphics, and perhaps a nice tune playing in the background through your adventure. Sadly, there are barely any sound effects, the most prominent being your walking, which sounds like there's some small, constant electrical surge going through your TV, and there are only two tunes in the game: the strangely familiar sounding theme tune played in the title screen, which also plays every time your game ends and a new one begins; and later in the game, you will hear a very brief melody you play on a trumpet, which sounds more like a tin whistle.

Even more sadly, the castle walls are all blue and the floors are all black, all of the rooms are of the same size, many of the interior design elements are recycled for many rooms in the castle, and the general use of detail and colour is almost alarmingly simplistic. But considering the amount of time put into each game in the Bomulus series, and having released them back to back within such a short period time for a machine that really didn't have that much games made in Finland, things could be much worse, and as you know from Space Satellite, you know they sometimes really were.


All in all, Bomulus and the Lost Crown is just a passable joystick-controlled adventure game, which makes you play the old-school way: map the area on paper, collect and connect the clues with trial and error, and then complete it if you have the perseverance for it. I got stuck at around 63%, and I'm not really sure I have the patience to continue from there. So anyway, here's how I rate this game:

If you want to have a go at cracking the code and find the lost crown, you can find the game as a disk image at least from a certain French retrogame image repository, and probably elsewhere, too. At least this time, you are free to choose your favourite MSX emulator, since Bomulus and the Lost Crown doesn't require a SVI-specific system rom or anything of similar difficulty to work. Don't say I didn't warn you, though.

According to Juho Kuorikoski's book on the history of Finnish games industry, as well as various online sources, there are still at least seven exclusive Finnish MSX/SVI titles that should be preserved and properly documented, in addition to the missing two parts from the Bomulus trilogy and the conversion of the quiz game, Nero 2000. So, if any of these happen to surface on the internet in the not too distant future, be sure that I shall be writing about them, one way or another. Happily, it looks like there could be a trace for part 2 in the Bomulus series, since I found this screenshot that is claimed to be from Bomulus atomivakoojana from some dubious-looking MSX archive... but I have to admit being doubtful about this one.

Once again, thanks for reading, hope you enjoyed it... even though it was such a short one. You know, I can't believe this was even shorter than the review of the text adventure Kultakuume I wrote a few months back...! Well, the next entry in the series will be the tenth one, and it will take us back to the world of C64, as they eventually always will, but perhaps this time, there will be a twist in the proceedings. But that'll have to wait for a while - we have some more regular entries to deal with prior to that. Bye for now!
Posted by FRGCB Dude at 20:11