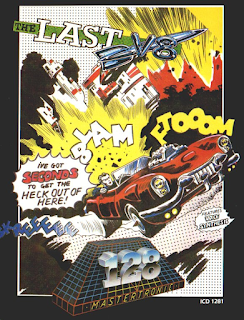 Designed and programmed by David Darling for the Commodore 64, with graphics by James "Jim" Wilson, music by Rob Hubbard and voice samples by Covox, Inc. Released in 1985 through Mastertronic's MAD label.

Conversions for the Atari 8-bits and Amstrad CPC made most likely by the same team - no conclusive documentation found so far. Released in 1986 through Mastertronic's MAD label.

Enhanced version designed and developed for the Commodore 128 by the original team, and released by Mastertronic in 1986.


Since I finished this month's planned entries in such a good time, I decided to do another quick one. I chose to do a comparison of one of the most notoriously difficult games ever released by Mastertronic (or more specifically, their sub-label MAD) because it's one of the rare games that were also released for the Commodore 128 to be played from the machine's native state. 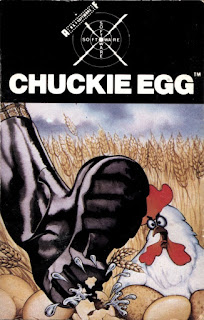 Originally designed and developed by Nigel Alderton for the ZX Spectrum in 1983.

Converted for the Acorn BBC Micro in 1983 and Acorn Electron in 1984 by Doug Anderson; for the Dragon 32/64 computers by Martin Webb in 1983; for the Commodore 64 by Sean Townsend and Martin Webb in 1984; for the MSX (and some of its clones) by A&F's "R&D team" in 1984; for the Amstrad CPC by Nigel Alderton in 1985; for the Atari 8-bit computers by Sean Townsend in 1985; for the Commodore Amiga and Atari ST by Icon Design Ltd with music by Tony Williams for Sound Images, and published by Pick and Choose in 1988; and for the IBM-PC compatibles by M.C. Lothlorien: Programming by Ste Cork, graphics by Anthony Anderson and Martin Holland, and music by Tony Williams. Published by Pick and Choose in 1989.


Judging by the amount of ports released of Chuckie Egg, you can see that a proper classic is in question here. The number of versions doesn't necessarily mean that the comparison must be stupendously large, as has been customary, because this is one of those old games that can be dealt with relatively quickly. I remember someone having made a request of this one a long time ago, but I have no recollection whom it came from, but I'm sure Chuckie Egg is classic enough to be on the list of comparisons that I simply must do, since it's possible... at least for the most part. 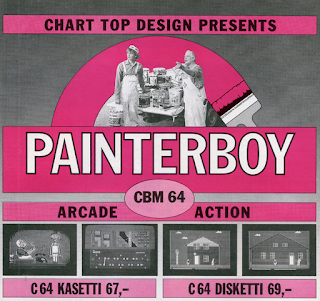 Developed for the Commodore 64 by Chart Top Design:

Released in 1986 by Tikkurila.


The distinction of being the first television or movie license game from Finland isn't Uuno Turhapuro Muuttaa Maalle, although it was made and released the same year. Painterboy was released a short time prior to that, and was based on the television and radio adverts from a Finnish paint company called Tikkurila, but it wasn't a particularly commercial release, so its cult status in Finland was almost entirely achieved by - what else - heavy piracy. I don't ever remember seeing this game being mentioned in any of the Tikkurila commercials at the time, but I was 5 years old at the time of the game's release, and hardly able to pay much attention to anything properly, particularly anything C64-related, since we only had a ZX Spectrum at the time. 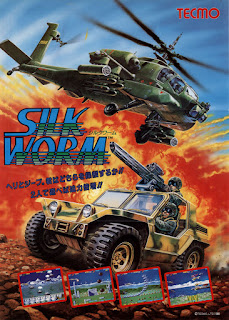 Developed by Tecmo Co, Ltd., and released originally for the arcades in 1988.

Conversion for the NES developed and published by American Sammy for the North American market in 1990.


Although I can't claim to be much of a fan of shoot'em-up games, the two Silkworm games have always held a strange appeal despite my never having really put much effort in playing either game all that much. The reason for this more than likely being that both games require two players in order to have a full experience, and back in the day I didn't really give much value to these kinds of games. So this shall be the first comparison made with a more significant help from my friend SJ, to get some insight into the two-player experience, but this time, we shall be only focusing on the first game because it has enough versions for one comparison. 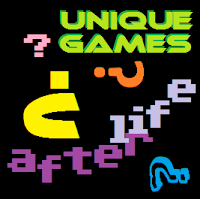 Welcome to 2016, everybody! Let's start this year with a sequel to the Unique Games special episode I did about 18 months ago. Phew! Now, I shall be focusing primarily on properly new games - ones that were released during 2015, but I shall also mention a few interesting titles from the previous two years that I wasn't aware of before. I hope this will be of some interest to at least some of you out there. As before, not all of these games are particularly unique, but all of them are exclusive, as far as I have been able to find out, and most of them have something really specific about them.